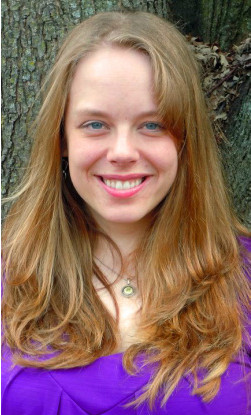 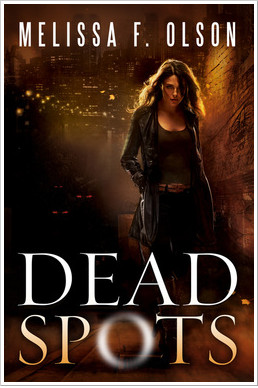 I had the amazing pleasure to see Melissa F. Olson read from her book DEAD SPOTS and let me tell you, it is a page turner! Olson combines vampires, werewolves, witches, and the main character Scarlett is a null (and you’ll have to read the book to find out the implications of that), to give a fresh and fast paced read. I had a chance to catch up with her afterwards to ask a few questions and below is the resulting interview.

AH: Which supernatural creature did you have the most fun writing in Dead Spots and why?

AH: Your book titles are very straightforward, especially with Trail of Dead as you explain on your website. Is there a specific reason you’ve chosen to title your works in this way and do you think it will change in the future?

MO: Usually I think titles are incredibly difficult to come up with, but both Dead Spots and Trail of Dead just kind of came naturally with the story circumstances: Dead Spots is that novel’s title because Scarlett is a dead space in the supernatural world, and because she stumbles into this clearing of corpses, and, to get a little bit artsy, because she’s pretty much dead inside after the things that happened in her past. I felt really lucky to come up with Dead Spots, and then realized I could piggyback onto a lot of those ideas with Trail of Dead, although I won’t go into detail because it might spoil the end of the first book.

In the future, I’d like to get away from the “dead” motif in my titles, though, because Charlaine Harris is already the queen of that particular list of puns. Maybe I’ll do a new set of puns with the color scarlet. There could be a book where she gets an anonymous death threat through the mail called Scarlett’s Letter, and one where she gets hit by a car called Smear of Scarlett. In yet another sequel she could team up with Justin Bieber to fight crime, and it could be called Scarlett (Bieber) Fever. And so on.

AH: What have been the easiest and hardest parts about being a published author?

MO: The hardest part is probably balancing my family life and my writing, especially before I really had an agent or publisher. At that time, every minute I took to write kind of felt like a minute I was taking away from my family, and there was no guarantee I would ever find any success with it. It felt like ditching the people who needed me so I could go gambling.

In that sense, I’m not sure there’s been an “easiest” part of being a published author; it’s more like a sense of relief, a loosening of pressure. Now that I’ve been published my writing has a new validation to it: I’m not taking time away from my family to play a giant slot machine, I’m taking time away to work at a job that I happen to love.

AH:  If you could visit any country in the world to take a writing vacation, where would you go?

MO: Great question. I’d want to go with somewhere with gorgeous weather (for me, that’s about 70 degrees and no humidity) and lots of beautiful scenery but no specific landmarks or tourist attractions, because then I’d want to go sightseeing instead of working. Maybe somewhere near the mountains in Nepal, or the cliffs in Ireland.

AH: Your adorable dog Max makes a cameo in Dead Spots. What is your opinion on talking animals and can we expect to hear some form of dog speak from Max?

MO: Ah, talking animals. I happen to love when dogs get a voice on paper, if it’s done right. I own the book version of Texts From Dog, and I’ve probably read through it fifty times. There’s a novel called Turning in Circles Before Lying Down about a woman who can suddenly hear her dog’s thoughts, and he’s hysterical (though he makes me glad Max is neutered; that dog can’t stop talking about sex). Harry Dresden’s spookily perceptive dog Mouse is one of the great characters in Jim Butcher’s series, and we get to actually hear what he has to say in one novel. I also like Kevin Hearne’s series about an immortal Druid who has a mind-link with his Irish Wolfhound, Oberon, but I do get awfully skeptical about Oberon’s college-level vocabulary and diverse interests in history and culture. That’s pushing the suspension of disbelief a bit too far for me.

I doubt I’ll ever write Max’s actual voice, unless I found a clever, magically-believable way to insert it, the way Butcher does. But I love putting him in the books, because I think Max is one-of-a-kind. He deserves to be immortalized, and until they perfect pet-cloning, this is the best I can do.

AH: You mentioned that there might be another book after Trail of Dead. What’s next for you after this series?

I hope to keep writing Scarlett books for as long as I find her interesting, and not a moment longer. I have a few different projects to work on during or after that series, though, and they’re all non-supernatural: I’ve been kicking around an idea about the relationship between two sisters for about a year, and my master’s thesis could be expanded to be book-length as soon as I get a chance. At some point I’d like to rewrite the first book I wrote, which is still unpublished, and I’ve also had a screenplay that’s missing an ending sitting on my desk for about four years; it’d be nice to finish that up. I hate having unfinished projects, so ideally I’d like to get all four of those things done before I start thinking about a new idea. Knowing me, though, I wouldn’t be surprised if I get sidetracked. It does tend to happen.

Melissa F. Olson is the author of DEAD SPOTS and the upcoming sequel TRAIL OF DEAD. For more information, please visit her website www.melissafolson.com