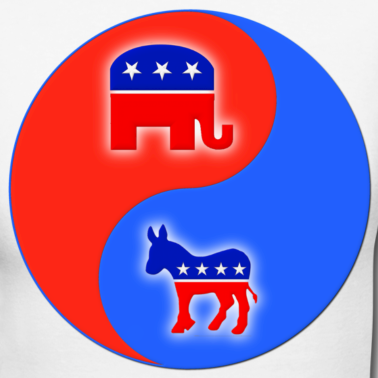 As a general rule, I do not discuss politics with people I like. Or I make an attempt to avoid them altogether. Sometimes it’s the easiest way to turn friendships or agreeable acquaintances sour.

And Wisconsin apparently is the drama pri madonna of the political sphere. We just can’t help it apparently.

You would never go to someone’s house and immediately start talking to them about politics, but people who don’t know anything about each other, much less some of the political topics they’re talking about, find it necessary to turn everything into a debate.

One of my quirks is that I love reading articles or watching videos and then scrolling to the comment section. It’s one of my guilty pleasures. Whenever you have a notion that people are generally good at heart, I dare you to scroll to the comment section and in ten comments or less people will start arguing about religion, race, or politics.

It’s hilarious but at the same time horribly pathetic.

This past weekend I was in the mall with my friend and she got wheedled into doing one of those surveys where they trap you in a room for about thirty minutes and then give you three dollars with a smile like they didn’t completely waste your life.

Being the good friend that I was, I went with her. This particular survey involved watching the trailer of an upcoming movie and telling the survey people if we would watch it in theaters and how much we liked it. Unfortunately for me, the most interesting movie they had was a political thriller starring Mark Wahlberg.

Now I adore  Mark Wahlberg, but even he couldn’t tempt me to go to the theater to see this movie on opening weekend or at all.

I’ve never been that interested in watching movies about politics because real life provides way too much material. I could actually see our government today doing half the things they do in movies based on politics and sometimes the movies are based off of something that actually happened.

Now a political comedy like “The Campaign” I would watch because we have to find some way to (keep from crying) laugh at this.

Real life politics is too much like a soap opera gone wrong.

This is also why I don’t read political blogs, listen to politics on the radio, watch Sunday morning debates, etc. And many of you may say ignorance is ignorance it’s not bliss and you’re right. However, politics is a system based on money and people saying they’re going to do something and then not. Then it all goes down a rabbit hole from there.

By now you may know (and if you didn’t, John spilled it in his last post) that Paul Ryan was chosen as Romney’s pick for Vice President. As of now, people (from the less politically minded side of the pool) are honestly debating whether he is attractive.

Really? Why is that a question we’re concerned with? Maybe ‘would he be a nice addition to help run our country’ should get thrown in there? Everything is biased, everything is skewed and slanted and politics is a picky, hot button topic.

Rarely do we find an unbiased source to educate us on the important matters. The amount of mud slinging is ridiculous. I bet if we took the millions we spent on political ads and put it back into education or job creation, American would be slightly better economically.

I said slightly because let’s face it, we’re in trillions of debt. I’ll get off my tiny soap box and put the megaphone away because I’ve succeeded in attempting to touch the topic of politics with a lukewarm, ten-foot pole.

And let’s be real, some of you were probably thinking it.

As Brennon so thoughtfully pointed out today, ambitious young people (read: aspiring journalists) hoping to break into their field have run into some difficulty for some time.  The industry as a whole is rebounding, but one thing is dead certain: Gen Y is moving away from traditional print media as a career. It isn’t only aspiring journos running into trouble, so it’s worth it to look at Generation Y from the bottom rung: the entry-level job.

In the past, the words ‘drudgery’ and ‘work’ didn’t often go together in the minds of 18-29 year-olds. A booming economy, access to luxury goods, and the idea of a certain lifestyle fostered by shows like The Hills and Laguna Beach created the impression that if Joe or (increasingly) Joanna American was young, smart and witty that a dream job was in the offing.  This also coincided with a shift from a manufacuring to a knowledge-based economy, which influenced in no small part apiring journos’ dreams of becoming the next Arianna Huffington or David Pogue.

That dream is more or less over.  For those wealthy enough, or just lucky enough to grow up a few short years before the crash of 2008, scaling back simply means packing their bags and going to Europe, or taking on an internship at their dad’s-best-friend’s-newspaper-cum-website. Yet for the rest of us, it means the dreaded S-word: Settling.

Not surprisingly, this has created some resentment not just among the generations, but within them as well.  It cuts across nationalities and classes, and is one of the main reasons why the OWS movement resonated with so many last year. Yet for many, just holding on to a job–any job–is considered enough of an achievement to brag about.  It doesn’t matter if it’s a crawfish plant or an auto dealership, aspring journos and non-journos alike are putting their dreams on hold sometimes permanently, telling themselves that they could come back to it later when the dust settles.

Like a lot of aspiring journos, writing and editing has been in my blood for some time. My brother works for Global Post.  My cousin writes press releases for a Montreal-based government relations company. Yet increasingly I count myself among those who have had their dreams deferred because of circumstances beyond my control.  A lot of my coworkers at the courier service where I work have had to do the same, and I know for a fact they won’t realize their dreams–ever.  I find my siblings’ obliviousness offensive, and resent their humblebragging in equal measure. I resent the talking heads and personalities who told us we were special, that we were guaranteed some Shangri-La $80,000 career and McMansion on the side. They’ve never walked an hour in my shoes–or in my case, ten.

I curse their bones to the dust.

Social Media Coordinator (and managing editor) John Winn is Hennen’s Twitterer in Chief.  In addition to writing for Hennen’s, His work has been featured in A Twist of Noir, Lightning Flash, Racket Magazine, and plenty of other online magazines.  He lives in Greensboro, North Carolina.