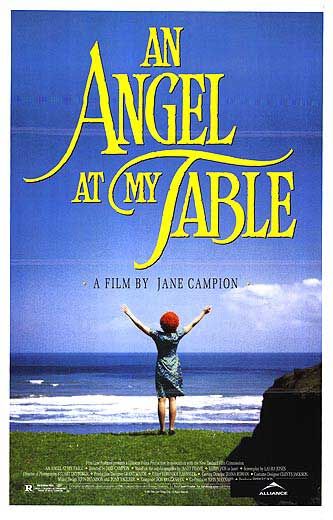 This movie was a soap opera gone wrong. It was an emotional roller coaster of awkwardness, pain, and sadness. It was also a bit abrupt and choppy, which could be because it was meant to be viewed as a miniseries instead of a very long movie.

The premise of this movie is the life of New Zealand writer Janet Frame who looks like the could be the twin sister of Orphan Annie. Her love of reading is shone at an early age when she reads books to her siblings and her teacher assigns their class to write poems. After this, her dad gives her a notebook for more poems.

Fast forward into her teen years, Janet is still reading to her younger siblings and the oldest child has died in the river. At the ripe of age of twelve, Janet decided she wanted to be a poet instead of a teacher.

Part two begins with Janet going to college to study teaching at the wishes of her parents. Apparently college-age Jane liked to spend time in cemeteries waxing and waning about poetry and the meaning of life. Jane found herself teaching and pretending that it was what she wanted to do.

She has a series of breakdowns and is admitted to the psychiatric ward of a hospital at the prodding of three of her professors. Her favorite professor Mr. Forrest tells her that she has a real talent for writing and I think this is when her talent truly comes alive.

Then she suddenly comes home to her family and announces that she has schizophrenia. Mr. Forrest visits her and says that he’s submitted her stories to some big name people and they’re impressed. He tells Janet that when he looks at her, he thinks of Van Gogh (which I’m not sure is really a compliment) and says that lots of great artists have schizophrenia.

Someone tells her they have a treatment for her decaying teeth at a hospital, and before long I realized that they weren’t talking about her teeth because she ended up back in the loony bin and they gave her electric shock treatment.

Shortly after that Janet gets told that she has to have a lobotomy and that her mother approved it. Then one of the doctors comes in and says that he likes her book of short stories and she’s not having the operation, but she needs to stay in the hospital for a little while longer.

Then she finally gets out of the nuthouse and ends up back home again where her brother and sister take her to see this random author named Frank who apparently arranged her release, and she  stays with him. He eventually organizes a literary grant for her to travel overseas and get more experience.

Part three begins with Jane arriving to London and panicking because they have no record of her staying there. She eventually finds a shady part of town with old, run down apartments where the landlord tells her he hopes she isn’t staying long through the winter because one of the women staying there died and got pneumonia.

Jane visits writers and poets who are impressed that she has her short stories and novel published in a book. They volunteer to show her around. She returns to her landlord, who is way too invested in her life and angry that she’s keeping the company of poets and writers.
Jane travels all throughout the world and experiences many different cultures. They influence her and her writing, but she is very awkward with them.

Jane finally returns to England, where her busybody landlord tells her she needs to find work. She tries to apply for a job as a nurse, but is rejected because she tells them she’s had psychiatric treatment for schizophrenia. She voluntarily admits herself into a hospital where they conclude that she’s never had schizophrenia.

She gets money to write about her time in hospitals and the new book gets favorable reviews. She meets her publisher and he offers her an apartment to write the next bestseller in. Jane returns home and continues writing.

Overall I would give this movie a 5/10. At times when I watched it, I was confused because things abruptly happened and the audience was expected to go with the flow with little to no explanation. I sympathized a lot with Janet being institutionalized and that part of the film was very dark. To think that this literary genius could have been lobotomized just because she was freaking out about wanting to write instead of teach? That was very chilling.

Another part of the movie that impacted me was her wanting to be a writer at twelve and knowing in her being that it was what she wanted to do. Though all the deaths, institutionalization, living poor, and people ignoring her because of her awkwardness, her fame slowly grew and she ended up doing exactly what she wanted to: writing in peace.

Alexandria Harris is a writer and recent college graduate. When she isn’t writing, watching the Lord of the Rings trilogy on repeat, or working in her father’s company, she tweets regularly on her account @_ALHarris. Alexandria lives in Milwaukee, Wisconsin