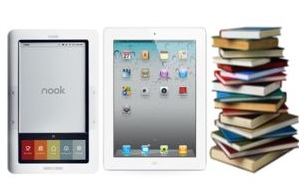 “Hello. My name is Alexandria, and I am a paperholic.”

Specifically paper hoarding–I just can’t throw them away. Also filing and the smell of paper…but the lack of paper (not my specific paper issues) is specifically what I’m trying to focus on.

A couple of things have happened in the world of digital readers and digital publishing.

First (and how important this is depends on if you own a Nook, Kindle, iPad or none of the above), the Kindle is $70.

Get them while they’re hot (at this price). It’s always a relief to know I can wait to get technology at a lower price in a matter of months or a few years, or that I can attempt to avoid a mob beating on Black Friday.

People have differing opinions about paper vs. screen. The convenience of tablets, the feel and smell of paper, danger to eyes, and reading comprehension have been studied and questioned. Tablets and smartphones have boosted ebook sales and, one can argue, it actually promotes reading among people who just want literature at the tap of their fingers.

Another worry is that digital publishing can replace comic books. Although the interview I looked at was from 2009, so technically the comic book industry should be dead by now.

Reasons why that is not happening: Several movies based on comic books were released in the past two years, spawning renewed interest in comic book films, comic book fans are LOYAL. Some religiously go to ComicCon every year, spend a couple days camping out at their favorite movie career, and enjoy walking down the street dressed as Mr. Fantastic, not caring who sees them.

Some newspapers and magazines have survived the paper apocalypse by using hybrid methods-separating websites into free and paid sections (the New York Times is a prime example), utilizing social media more and expanding marketing departments, or incorporating soft news into their hard news regimen.

Secondly, Barnes & Noble’s new PubIt! system seems to be picking up speed. I’m unsure why the exclamation point is necessary, but perhaps it makes potential consumers more inclined to use it. Christine Rose does a fantastic job of explaining exactly what PubIt! is, but for those who aren’t familiar, I’ll recap.

PubIt! has been around since 2010, but many people haven’t heard about it. The reason is probably because Amazon was so far ahead in the digital publishing arena, that Barnes & Noble needed some extra time to come up with a viable solution. Otherwise it would’ve been like David going up against Goliath, and hitting himself in the face with his slingshot.

The same goes for the Kindle vs. Nook debate. As Rose notes in her post, Amazon came out ahead once more. The other factor here is pricing and the fact that since Amazon has more resources and diversity across its products, it could offer more to authors in terms of digital publishing. The same also goes for its Kindle pricing.

I’m in group C (sans Kindle and Nook, tactile & olfactory paper lover) but the day may come when some doctor discovers that loving the smell of paper so much is an addiction or causes cancer; then I’ll have to convert.