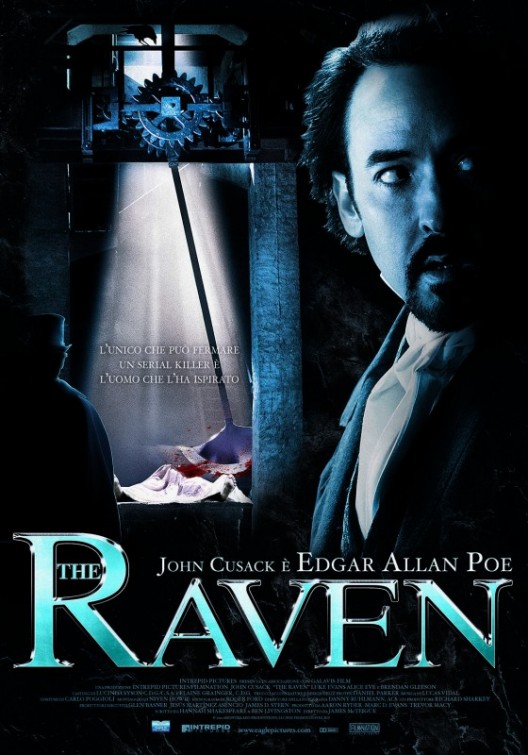 “I know there is a darkness to Edgar, but they’re all up here (points to head) every woman he’s ever loved has died in his arms. I believe that God gave him a spark of genius and quenched it in misery…” -Henry Maddox, newspaper owner

“Feels as if I’ve gone from author to character in one of my tales, trapped in the devil as any of the hapless bastards that I’ve created.”-Poe

It was time for us to delve into the mind of a poet. However in “The Raven” Edgar Allen Poe is portrayed as a washed up poet, drunkard, and sometimes contributor of a newspaper where he takes it upon himself to criticize the likes of Longfellow, Emerson, and brilliant contemporaries. Apparently the well of Poe’s genius has run dry.

The audience witnesses the extremely bloody pendulum killing (don’t eat and watch this) and then we go from bloodcurdling to sappy with Emily, who Poe is in love with.

Poe is brought in as a specialist by an inspector because the killer is following Poe’s tales to the minute detail to terrorize the city of Baltimore.

Poe’s new fiancee Emily and he decide that they will make their engagement public at a masked ball her father (who hates Poe) is hosting. It is the social event of the year for Baltimore. However, that is the same night that the killer chooses to strike again using “The Masque of the Red Death.”

They shoot the interloper and catch him, but not before the real culprit has disappeared with Emily. Now that Poe is really personally invested, it is up to him to save Emily and find the killer before time runs out.

I’m sure every writer wants to see their stories come alive in real life, but these are particularly gruesome stories to bring to life. The stories are no longer safe with imagination, they are contaminated by reality, fixating our minds with horror.

Then to relive the monsters of your own making, to craft them into more gruesome detail–it’s no wonder Poe was crazy.

Poetry is food for the soul, a soul wrenching endeavor and so it makes sense that the movie was a little melodramatic. There were a few quotes and glimpses into the mind of a genius. However, I think the movie would have been better served as a biography of Poe’s life. He certainly had an interesting one.

The costumes were bright at times but mainly dull, mimicking the movie setting. Outlandish chases mixed with interesting points of deduction, it was basically watching a mystery movie a la Sherlock Holmes without the Watson and mixed in with a little Saw. Oh, and at two points I was getting Phantom of the Opera deja vu.

It was adventurous of the script writers to add a fictional twist to Poe’s life, but there needed to be more turmoil, more raw emotion. The movie was definitely suspenseful, but too predictable which is why I felt as though there was something missing. A twist at the end made me give it a higher mark, but for the most part you could guess along with Poe.

I would give this movie a 6/10. You don’t need to rush out and buy the DVD, but it’s good for a one-time watch and literary types will appreciate it for what it is–an interesting and mostly fictional take on Poe’s life.

It was intriguing because Poe is generally a mystery/detective gothic-style  fiction writer. The writers tried to turn the movie into that very thing, but taking the mold from his stories didn’t allow for enough imagination to really keep an audience riveted for the entire movie. The way his life, especially the end of his life, was incorporated and tweaked was thought provoking.