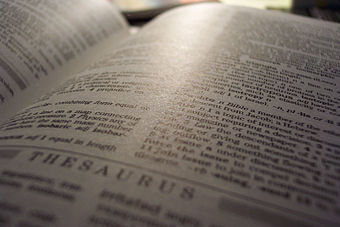 When I’m at a loss for words (and those who know me know that usually isn’t often) sometimes the only place I can express myself and make sense of it all is through writing. But sometimes the problem follows me into my sacred space, pins me down, and I’m forced to threaten it with my secret weapon: the thesaurus.

I’m sure we’ve all been through its pages of synonyms, trying to find the one word to save us from writer’s block. The thesaurus is supposed to be our friend, to bring meaning and connection to the myriad of words in its cousin the dictionary. But what if that fails?

This is the predicament I found myself in last night–scattered papers, a crude map, a Norse-English dictionary, a thesaurus, ninety six thousand words in Microsoft Word, and a glaring problem.

For the past three hours I had been pouring over the correlation between light and shadow, how to make the word Lumen sound cool, and an effective word for winter that would work well with court (I settled on frost).

My mission and problem was how to find a word to replace autumn while still retaining the meaning and it had to sound believable in front of the word court (somehow the cornucopia court seemed laughable and brought back too many flashbacks of The Hunger Games).

It’s sad that even though the average woman apparently speaks 20,000 words a day, but 500-700 words of actual value, none of the 500-700 meaningful words in my vocabulary could help me out!

I used the thesaurus, I went through my memory bank of things associated with autumn. Finally, I brought out the last line of defense: my siblings.

I am fortunate to come from a family of readers. We critique books like we’re in front of a camera with complimentary Columbian coffee, biscotti, and an audience hanging on our every back and forth. So in my desperation I called them in. We sat down for another half an hour (three heads are better than one) and tossed ideas back and forth.

Finally my 17 year old sister Morgan hit the jackpot. “Hey, why don’t you call it the Reaping Court?”

Then she back-tracked and said maybe it was associated too much with the Grim Reaper, but the possibilities were already pouring through my brain synapses and I was hooked. It was perfect.

Many of you are probably involved in critique groups or have friends who love to read and write as much as you do. You already know connections are essential. Seriously. I often talk a new story idea over to see if there is material  that doesn’t make sense or illogical scenarios. The best material can come from someone who isn’t too invested in your universe like you are.

That can be difficult. Finding the right words (and people for that matter) is hard. You don’t want a person who sings your praises and tells you that it was wonderful and transported them into a different world.

This person should be locked up in the back of your mind. You need a healthy mix of Simon Cowell and Sharon Osbourne because maybe we shouldn’t hear how great we are all the time. Otherwise we’d dig deeper. We’d be forced to face the reality that before the greats were greats, many people probably hated their work and it ended up in the slush piles or in somebody’s basement.

Only though critiquing and dialogue can material evolve to the next level. Usually nothing is so perfect or revolutionary that it cannot be fixed, tweaked, or reworked into something more remarkable.

Sometimes finding words requires us to say a few more to tease them out from where they’ve been hiding.

Through the lips of a young’un my concept was saved and I didn’t have to spend too much time staring at an empty screen. Sometimes you just need better friends, especially when the one you hold most dear is a thesaurus.

Alexandria Harris is a writer and recent college graduate. When she isn’t writing, watching the Lord of the Rings trilogy on repeat, or working in her father’s company, she tweets regularly on her account @_ALHarris. Alexandria lives in Milwaukee, Wisconsin.