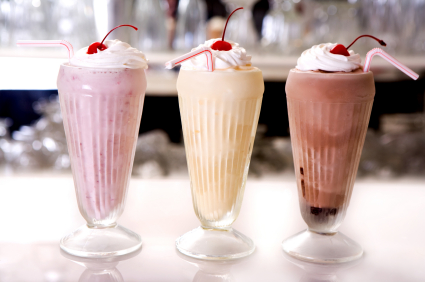 And though Kelis was in absolutely no way talking about a milkshake, I actually am.

In the land of beer, cheese, Door County cherries, and usually humid continental weather it has gotten to 105 degrees.

That was my breaking point.

Some of you are probably laughing at me right now and that is completely fine. I’ll bear your laughs if only to have you arm me with one of those spray bottle fans (the ones that were cool to carry around in public five years ago) as I face down the heat.

My Northern blood’s white flag goes up immediately when it gets into the 90s. Especially when there are heat advisory warnings. Air conditioning is my solace and I use it liberally. When I do have to go out, I placate my protesting body with sunscreen and treats. Secret treats.

Only these treats are about as secret as wikileaks. Since I made you hungry Friday, I thought it would only be fair to quench your thirst today.

This year I was introduced to the world of secret menus. If you’re looking to mix it up at a few well known restaurants, step into my tastebuds *ahem* parlor for a minute. Your brain will love you for it.

I was ecstatic when I found out these existed at places I frequented like Jamba Juice, Chipotle, and Starbucks. If you haven’t already been made aware, let me help you walk into the light my friend. Below are a few of my favorites:

Starbucks: When I found out Starbucks had a Cap’n Crunch frappuccino that tasted exactly like Cap’n Berry Crunch, I had to try it. Not because I haven’t had Cap’n Crunch cereal since I was five (strictly a Honey Bunches of Oats and Cheerios brand lady) but because I had to see if it was true. It was and it was better than I’d imagined. Made with strawberries and cream, hazelnut, and a dash of toffee, it tasted like the real thing. If you don’t have an inner five-year-old, you could also order a Chocolate Pumpkin, a Tuxedo Mocha, a Super Cream Frappuccino, and more.

Chipotle: I am a Chipotle fanatic. I love Chipotle almost as much as I am a raving fan for Chik-Fil-A fare. But I never expected for Chipotle to literally make anything you want–within ingredients. And since I’m a nut for their cilantro-ladden guacamole, I’ve had it with everything. But when you’ve been around the menu a couple of times and want a fantasy quesadilla with with anything you want or to mix it up with a quesarito who could pass that up?

Jamba Juice: If you like candy but are afraid of cavities, have the taste in a smoothie! I personally recommend the Pink Starburst. It’s fantastic. As proof of how good its secret menu is, Jamba Juice also has flavors like Thank You Jesus and Hello Jesus among Skittles, Sourpatch Kid, Apple Pie, Now and Later, Strawberry Shortcake, and a few others. Here’s hoping I can drive by and get some Holy Ghost juice that will have me singing some praises after church next Sunday.

Potbelly’s will make you a cheeseburger of all things. Yes I wrote it–cheeseburgers. The two other menu items are a Fireball (meatball sandwich with chili on top) and Wrecking Ball (combo of two sandwiches – the meatball and the wreck).

For cooler treats, try out the Dairy Queen secret menu or a couple of my unhealthy favorites that aren’t open secrets, but still refreshing on unbearable days:

Ruby Tuesdays: Peach Tea (they put little fruit pieces in the bottom small enough to suck up your straw)

Starbucks: Green Tea Frappucino with a shot of espresso

Chick-Fil-A: Banana Pudding Milkshake, Arnold Palmer, Cheesecake Shake (buy a piece of cheesecake and ask them to blend it into whatever milkshake you choose. My personal favorite was Strawberry Cheesecake. It tastes like the best near death experience you’ve ever had. Just don’t think about the calories afterward)

For more restaurants with secret menus, this list has a nice compilation of some I’ve already mentioned in its gathering of twenty four restaurants. And on that note, I’m going to blast some seasonal Nelly to win the war of blaring music in my neighborhood and cool off with some sweet tea.

Alexandria Harris is a writer and recent college graduate. When she isn’t writing, watching the Lord of the Rings trilogy on repeat, or working in her father’s company, she tweets regularly on her account @_ALHarris. Alexandria lives in Milwaukee, Wisconsin